The 15th is really a par four and a half. No longer the three-shot par five it seemed to be when I first joined the club, it would now likely play as a long par four under tournament conditions. With this in mind, the green and approach is eminently playable under either scenario. The bunker complex short and right of the green was modelled on the series of bunkers between the 14th and 15th holes at Kingston Heath. Those who have deliberately avoided the fairway bunkers and played out to the right will need to deal with these for their second. – Mike Cocking (Course Architect) 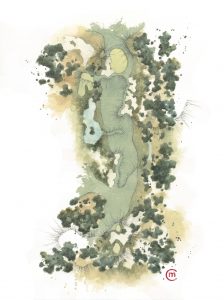