For years the fifteenth has played as a medium length par five where golfers had to walk back the full length of the hole just played in order to tee off. As part of the redesign we kept these tees so the hole could remain as a par five but also added the option of playing this as a long par four from tees located next to the 14th green. Not only is it a terrific long par four, but adds some variety to the layout and cuts down on the long walk. Both tee shots are largely blind, playing over a ridge which runs across the fairway, but they open up a great looking second. There is some nice visual trickery at play with the second shot as the bunker on the corner of the dogleg merges with greenside bunkers and those around the 9th green, making it appear like there is more trouble (and less room) than there actually is. The best line is over the bunker on the dogleg which opens up an easier approach, especially when the pin is tucked in the right corner. – Mike Cocking (Course Architect) 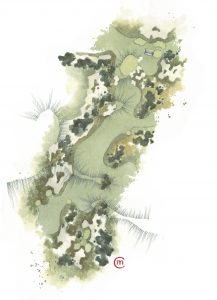